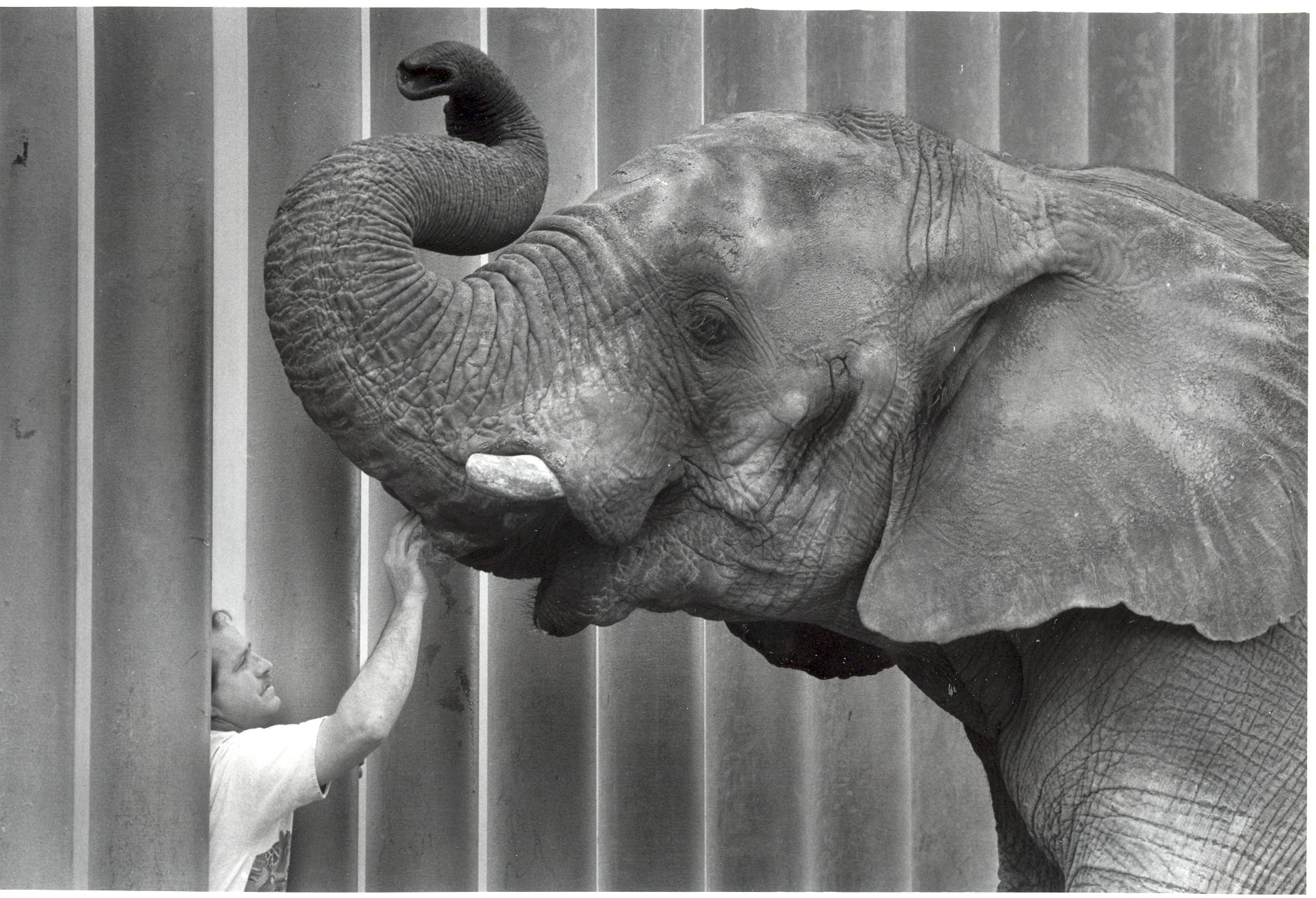 This Year we Celebrate The 20th Anniversary
of Sonny the Elephant 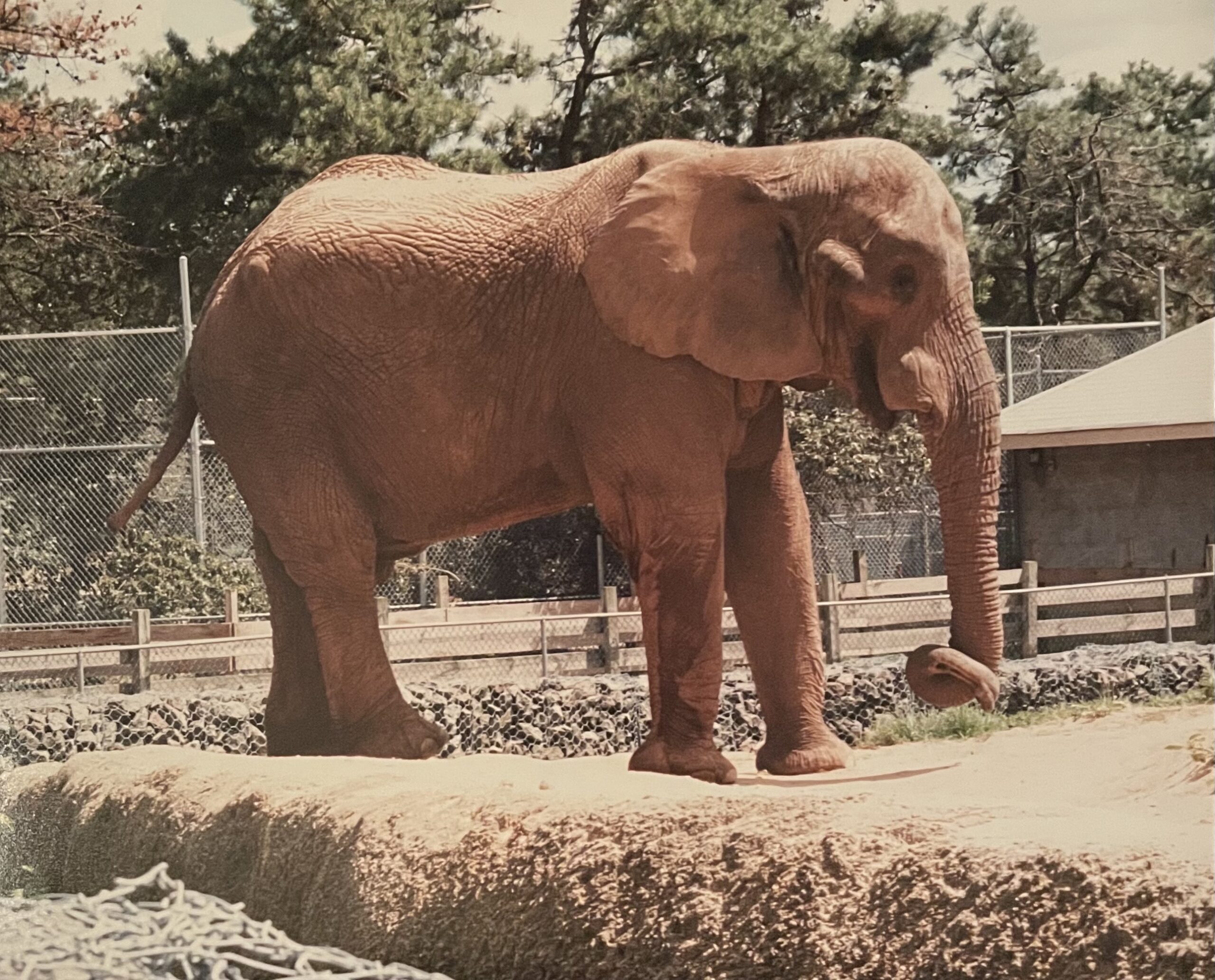 Most of us come into this world in a loving family.  There we are nurtured and protected, and we grow in adulthood.  Sonny was no different.  He too had a family but his freedom and his family in his homeland were abruptly taken from him at a very young age.  He came to the united States with 40 to 50 other confused and frightened young elephants after a culling in Zimbabwe.  They traveled and arrived here without their mothers and aunts to guide or comfort them.
They were moved to training facilities to get ready for zoos or circuses.  Sonny would have nothing to do with the training process of elephants (as it was in the early 80’s).  Sonny chose not to allow his will and his spirit to be broken and was labeled a rogue bull elephant.

One can only imagine the indignities that he, as well as countless others suffered in his quest to remain free and proud. He was sent to a small zoo in Clovis, New Mexico where he stayed and entertained guests until he got big and strong enough to take his perimeter fence apart and escape for a walk through the zoo.  This happened several timers and the zoo started looking for another place to send Sonny.  Because of his reputation as an untrained rogue bull plus the gouge in his trunk (that was probably the result of the culling) the zoo in New Mexico had no takers for him.

After his third escape and no other zoo’s interest in him, the city council began discussions on euthanizing him.  The people of Clovis fought this and got publicity about Sonny.  A group from California, “The Hasi Group” took up Sonny’s plight and wrote his story to every zoo and elephant facility.  We received that letter and were the only ones to call and inquire about him.  We didn’t realize what we were in for until the trailer with Sonny on board arrived.  With a hole in the side of it that a bowling ball could fit through! Every now and then Sonny’s tusk would come through making it even larger.  Even with our joy to see him finally here and in his new home there was sadness to see this brave facade of a scared and confused young elephant. 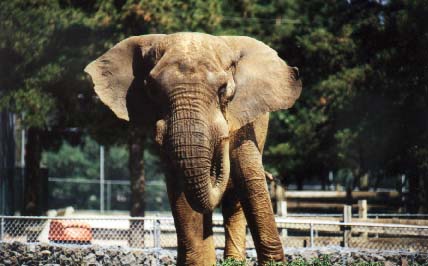 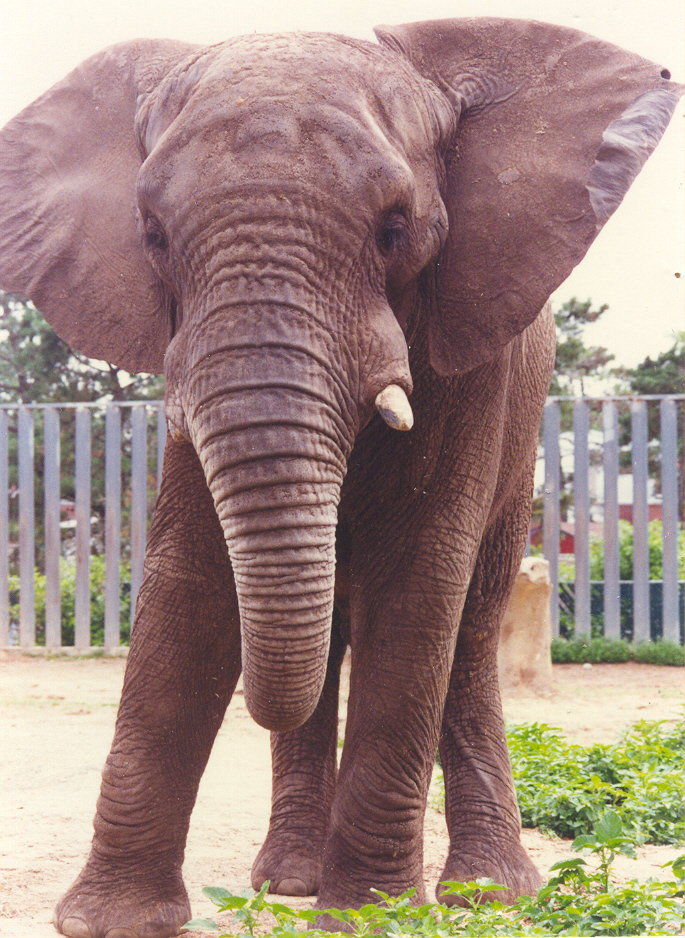 The First Night:  We stayed there with him for his first few nights to make sure he was all right and to comfort him.  With his trunk, he touched and tested all the pipes holding him in and the gate he had come through.  He finally stopped and seemed to relax.  Throughout the night we were awakened by a low rumbling sound.  It didn’t even sound like it was coming from him, but you could feel it as much as you could hear it.  Sonny was trying to find out if there were other elephants nearby.  The next night he relaxed a little more.  John thinks he finally slept the third night.
We worried the first day we let him out, not knowing what to expect, wondering if all the planning was going to work.  I’m sure he was just as scared and worried not knowing what awaited him beyond those big gates.  He was very cautious.  He put his trunk up and ears out to sense any little change.  He bravely took several steps forward toward his new yard, but then unsure of this new environment, he would retreat inside.  It took several repetitions of this to muster the confidence he needed to explore his new home.
Once outside, Sonny began to investigate everything.  After a while he seemed to relax a little and started to eat but his ears went up woith every new sound.  Day  by day he relaxed even more and things finally became routine and he started to trust us-letting us rub the back side of his ears, brush his back with a broom and rub his tongue if he has the promise of an apple afterwards.
he taught us all a lot.  Most of all he taught us how intelligent elephants are.  A perfect example lies in one morning when he wouldn’t go all the way outside into his yard electing instead to play between his inside and outside gates.  But when Sonny played, things usually wound up broken.   So first we tried bribing him with apples to lure him outside.  It didn’t work.  Next, we tried getting stern, calling his name and telling him to move outside-this didn’t help.  Finally, we ignored him, walked away and hid.  After he destroyed some more siding, he made the decision to walk outside and eat his breakfast.  John thought Sonny was out in his compound and decided to close the outside gates, but Sonny was playing some more.  As John closed the gates, he soon realized that he was eye to eye with Sonny, who had snuck around the side of the building.  he showed John that John had not outsmarted him.  Sonny always had to have it his way. 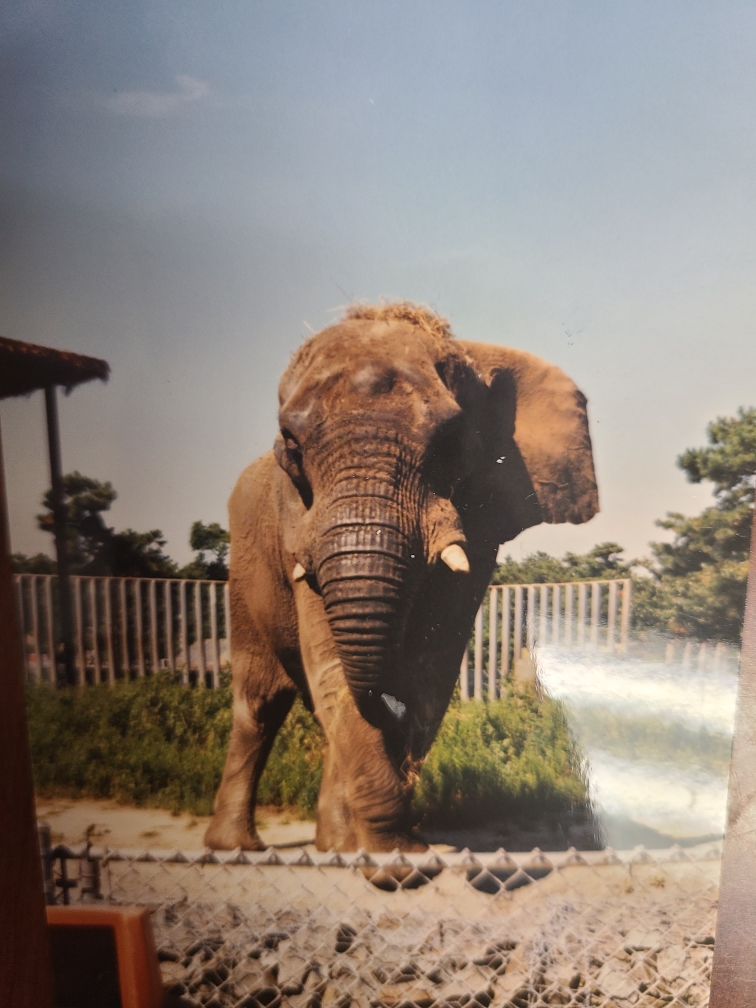 Moat:  One day Sonny was playing with a new ball in his yard, Oliver huis neighboring steer got excited.  Sonny, seeing Oliver jumping around, feared his “toy” might be taken away and ran to protect it.  As he reached the edge of the moat, he lost his footing and slipped down the moat.  Dazed and confused, not knowing exactly where he way, he stood up.  After feeling the earth shake, everyone came running to the compound.  The staff coaxed him over the steps designed to get him up and out of the moat if this should ever happen.  He tried to climb the first step but felt off balance and stopped.  After the staff had exhausted all possible ways to coax him up the steps, Sonny decided to evaluate the situation.  He turned his back to the steps , which caused concern to the staff because they thought he was giving up and going to wanted around the moat.  But Sonny was just approaching the problem his own way.  He backed up to the step, bracing himself by pressing his trunk up against the wall in front of him and proceeded to go up the steps backwards.  This almost worked but he ran out of trunk.  He realized this wouldn’t work.  So he turned around to look at the steps again.  At that point, John grabbed his trunk and directed it to the lip at the top step.  Sonny then tested it by pulling on it, decided it was secure and pulled himself up the steps and out of the moat.  Everyone in the compound, realizing who was coming back up, ran like hell.  Sonny slowly walked over and ate his dinner as if nothing had ever happened. 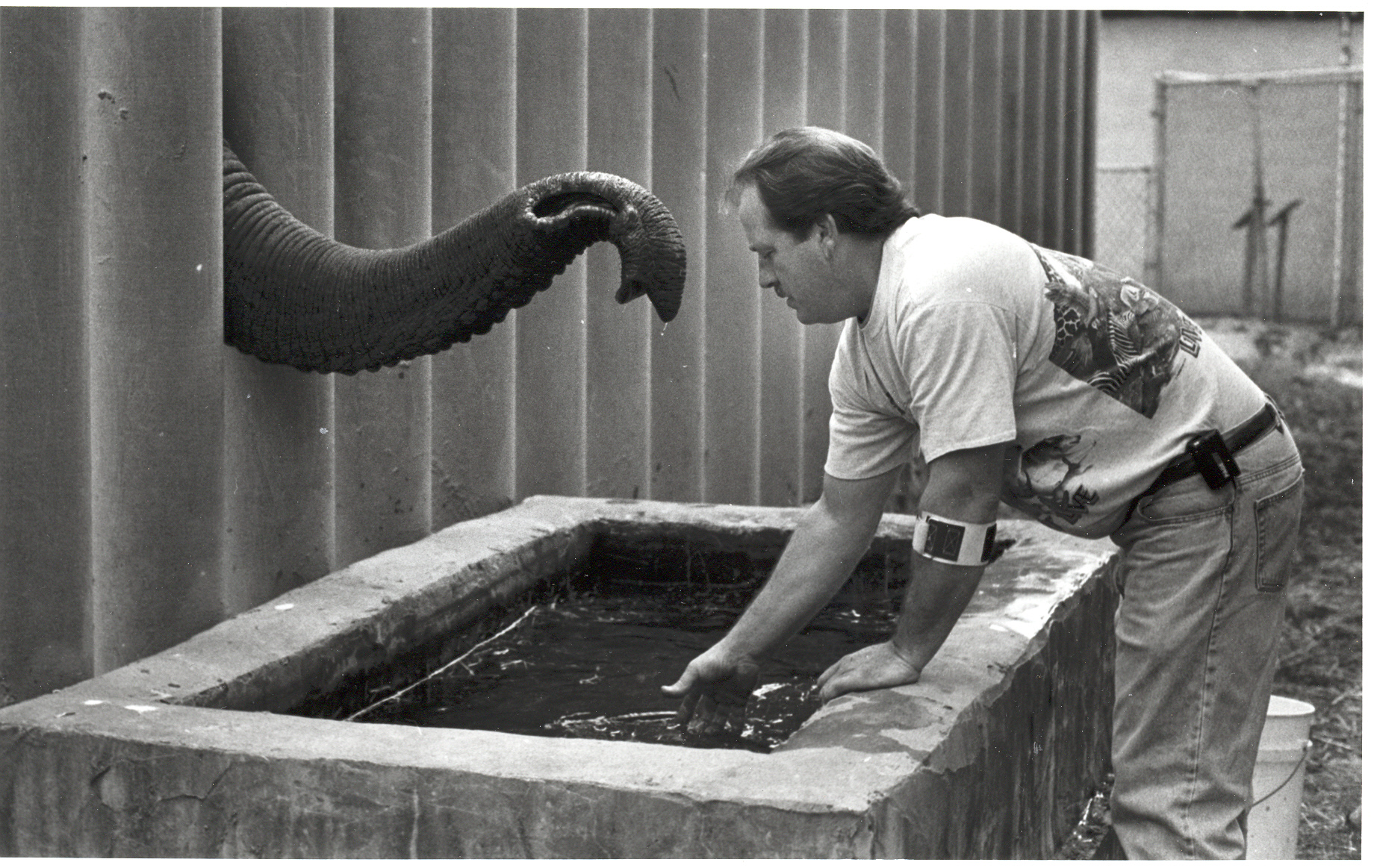 You would rarely catch him lying down to sleep.  No matter wat time of the night you stopped in to check on an injured or sick animal, he seemed to know you were coming and would be on his feet, checking on you.  But, when it became necessary to camp out in the barn to care for sick or hurt animals, he would have to eventually give in and lay down to sleep.  But you never could.  His snoring was as loud as he was large, and you could almost envision the barn walls being sucked in and pushed out with every breath.

These things will last in our memories forever and we are better people for having known Sonny.  But there is one particular memory that stands out from the rest.  he was only here about four or five months and John went to open his gates to let him in for dinner.  He had been playing in a mud hole on the other side of his gate.  When John opened the gate and stepped back, he saw the most amazing thing.  Some might call it coincidence or John’s imagination, but the puddle that he had formed in the found was made in the exact shape of Africa.  At that moment, John looked at him with awe.  That was symbolic of all that Sonny knew and felt.  We were just keeping Sonny company during his journey home.  he’s there now.  God bless him. 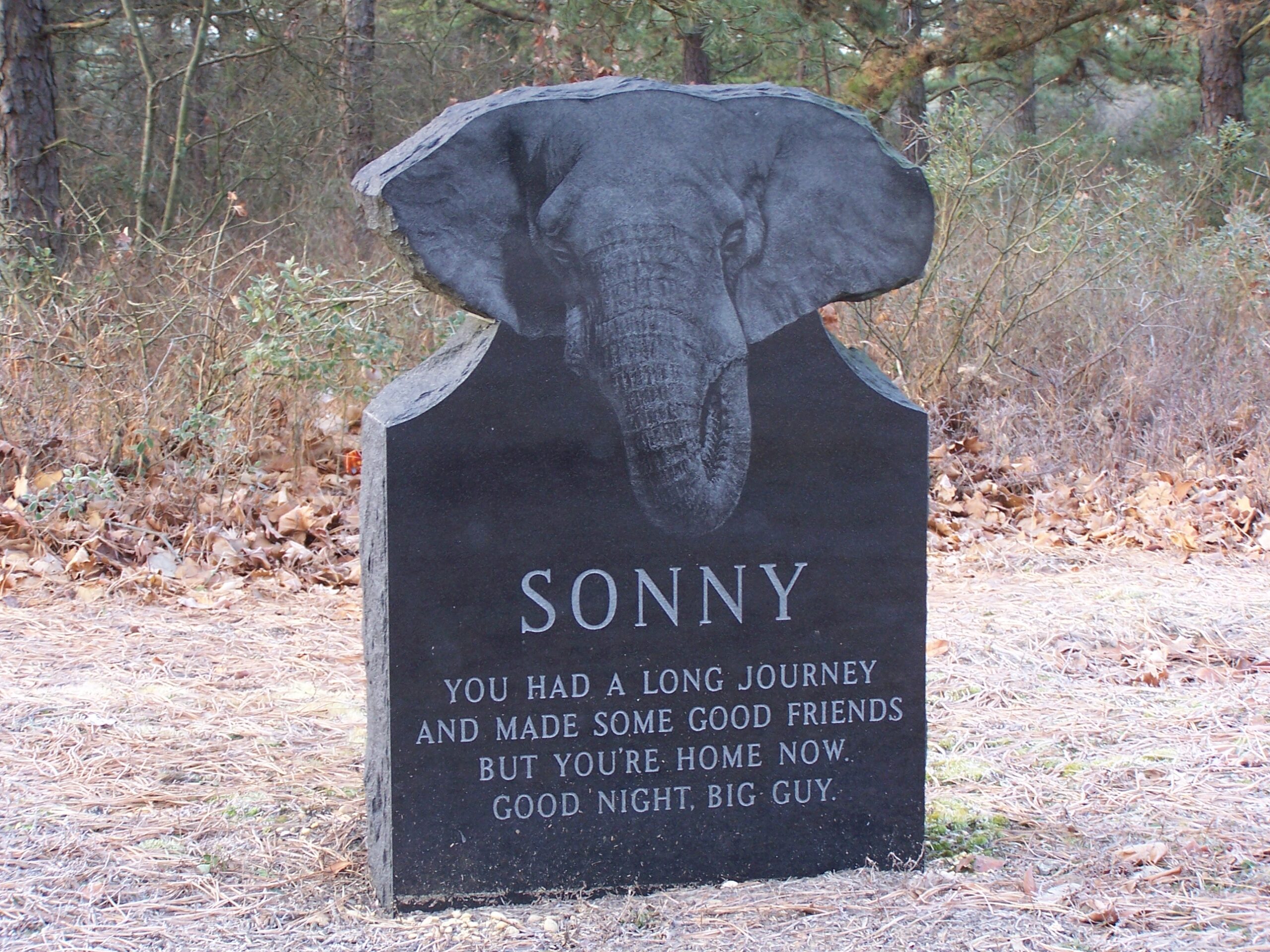 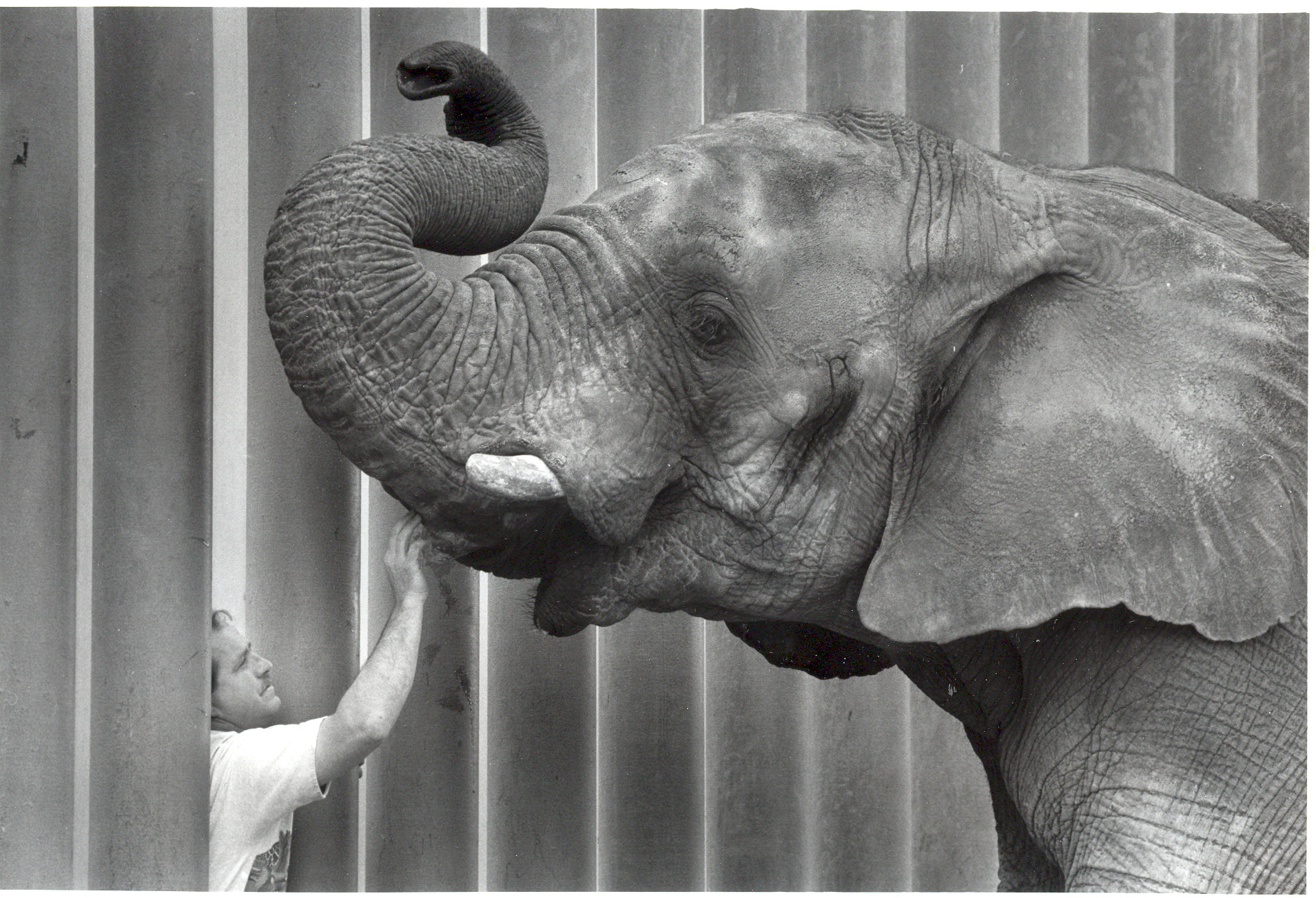 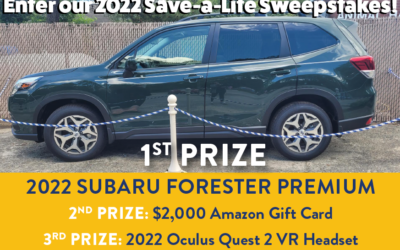 We have our Winners!

Our 2022 Save-A-Life Sweepstakes was our best year yet!Our winners have all been contacted and prizes have been collected. Thank you so much to all that have entered & supported us this year! We were able to raise just over $168,000 for the animals in our care!... 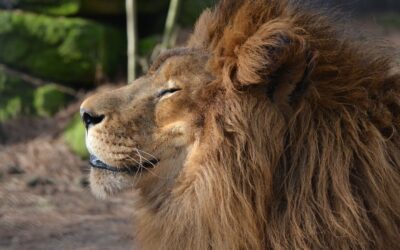 AHS Popcorn Park Celebrates World Lion Day August 10th is World Lion Day, internationally observed annually with an aim to raise awareness and gather support for lion conservation. Over the course of five decades the global Lion population has decreased by about 95%,... 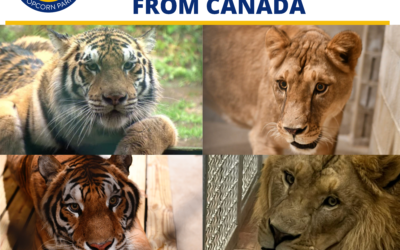